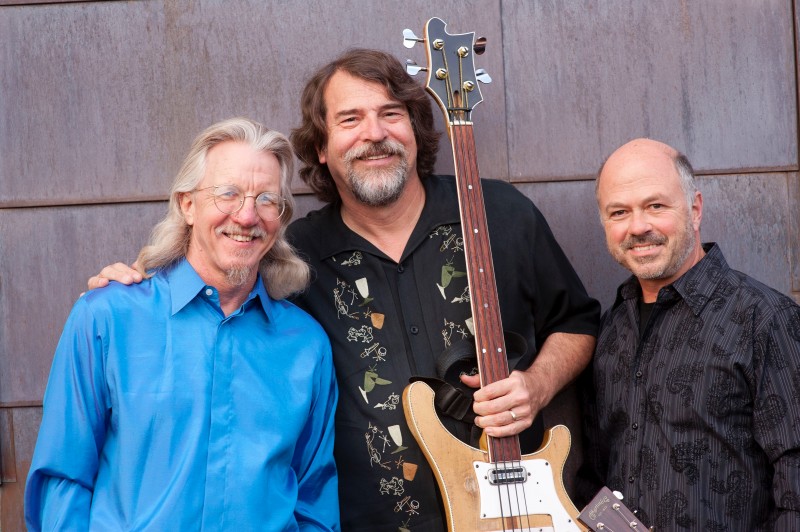 Back by popular demand, kicking off our fall season — Chris Brubeck and Triple Play on our main stage! Triple Play has something for everyone with their crossover music blending jazz with blues and folk music.

Triple Play is the name given to three outstanding and versatile musicians, Peter Madcat Ruth (on harmonica, guitar, jaw harp, percussion & vocals), Joel Brown, (folk and classical acoustic guitar and vocals) and Chris Brubeck (electric bass, bass trombone, piano & vocals).  Collectively they bring a rare level of joy, virtuosity, and American spirit to the folk, blues, jazz and classical music they perform. Triple Play’s musical roots go way back (nearly 40 years!) in each member’s history. Chris and Madcat have toured and recorded together in different settings since 1969, first as young rock musicians in the group “New Heavenly Blue” (with albums on RCA and Atlantic Records), “Sky King”(on Columbia), and then as jazz musicians touring the world with Dave Brubeck.

Chris went on to form the group Crofut & Brubeck with the uniquely talented banjo player  Bill Crofut and also featured Joel on guitar.  A highly unusual and critically acclaimed CD, “Across Your Dreams” (Telarc) featuring famous mezzo-soprano Frederica von Stade singing  songs written by Chris, Dave & Iola Brubeck.  Their next project was the recording of the acclaimed “Bach to Brubeck” (Koch International Classics) at Abbey Road Studios with the London Symphony Orchestra.

Sadly, Bill Crofut passed away in 1999, and Madcat joined Chris and Joel to form the group Triple Play.    Their live performance is documented on their first cd, “Triple Play Live”, recorded at one of their college concerts.  In reviewing this disc, All Music Guide wrote:  “This boundary stretching CD should be investigated by anyone who enjoys great American music.”

Their second CD, “Watching the World” was recorded in studios across the country and according to All Music Guide:  “It’s great to hear a group that combines top-notch musicianship, potent originals, and a touch of humor, this CD is truly a Triple Play in any fan’s score book.”

With an ever-expanding repertoire, the Trio continues to play in concert halls, clubs and festivals all over the country, including performing many of Chris’ symphonic arrangements with orchestras across the U.S.   Recently  they played a set at the Monterey Jazz Festival and later that evening were featured in the premiere of Dave Brubeck’s Cannery Row Suite.    Paul deBarros, writer for the Seattle Times and Downbeat, commented:  “Triple Play is what jazz always was and always should be about:  good-time rhythm, unbridled joy and the sweet release but bittersweet aftertaste of the blues.  If there’s a better old-time blues and jazz harmonica player out there than Madcat Ruth, I’d sure love to know where he lives.”