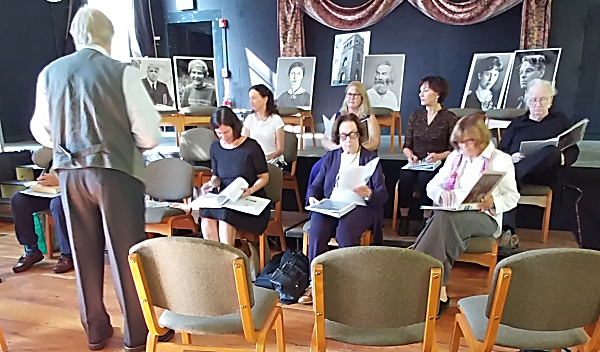 Listen to the audio recording here. You can skip to any selection using the time chart below.

On the stage before the program began, photographs of some of the poets, left to right: Robert Frost, Maxine Kumin, Emily Dickinson, Walt Whitman, Sylvia Plath, and WB Yeats. In the center is the Poet’s Seat Tower in Greenfield, Massachusetts, with a plaque for the poet Frederick Goddard Tuckerman: 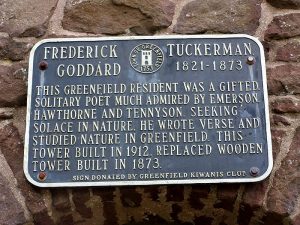 Jayne Benjulian is the author of Five Sextillion Atoms, published in 2016. Her work appears in numerous literary and performance journals. She was shortlisted for the Bridport Prize in 2017 and a finalist for the James Hearst Poetry Prize from North American Review in 2018. She teaches writing and performing poetry at The Foundry in West Stockbridge.

James Kraft’s long and distinguished career as an educator, arts administrator, biographer, reviewer, editor and poet includes being General Editor of The Works of Witter Bynner, teaching American literature at the Phillips Academy, Andover, the University of Virginia, Wesleyan University, and Université, Laval in Quebec City; and serving as Director of the Office of Special Projects at the National Endowment for the Humanities. He lives in Lenox, and teaches, among other places, at the Berkshire Institute for Lifetime Learning. His two poetry collections are reunion (1987, New York: The Pomise of Learning, Inc.) and Walker..

Rebecca Hart Olander’s poetry appears widely in literary magazines. Her chapbook, Dressing the Wounds, will be published in 2019 by dancing girl press, and her debut full-length collection, Uncertain Acrobats, is forthcoming from CavanKerry Press in 2021. Rebecca teaches writing at Westfield State University and is editor/director of Perugia Press. rebeccahartolander.com

Of Hilde Weisert’s poetry collection The Scheme of Things, Ursula Le Guin wrote,
“Hilde Weisert’s quiet, versatile poetic voice, fully at ease in narrative and lyric, is distinguished by vivid accuracy of thought and speech, modest but absolute courage in choice of subject, a dry, sweet humor, and a generosity of spirit that brings me back to her book again and again.”

Irene Willis is the author of five collections of poetry including At the Fortune Café, winner of the Violet Reed Haas Prize and National Book Award nominee (Snake Nation Press, 2005). Her poetry has won numerous awards. Irene is poetry editor of the online International Psychoanalysis, and is at work on an anthology on immigration.

0 thoughts on “Today’s Poets in Conversation with the Masters”