“Our Town at the Minack” A film documenting the preparations by the Sandisfield Players and their trip to the Minack Theater in Cornwall, England 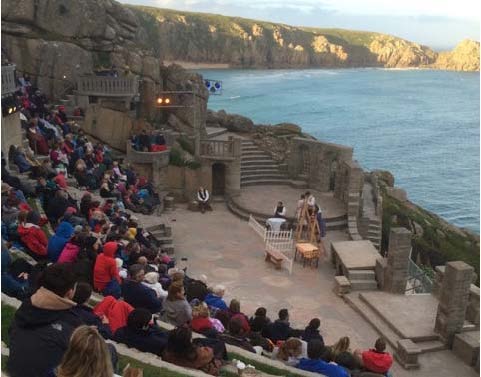 We are thrilled to present the long-awaited premiere of this film by Jerry Herman as the opening of our “in the Arts Center” performance season!

Our Town by Thornton Wilder was first performed by the Sandisfield Players at the Arts Center in 2013. On a trip to Cornwall in 2014, Ben Luxon, the producer and director of the show, mentioned to his friend, Phil Jackson, the manager of the Minack Theatre, that he was directing the show in the States, and Phil asked him if he wanted to perform it there. Ben agreed, and the performance was scheduled for the summer of 2016. Inasmuch as the Minack is an outdoor venue, and its stage is twice the size of the stage at the Arts Center, arrangements were made to rehearse at the Sandisfield firehouse.

This film, produced by Jerry Herman, chronicles the play’s development from our local indoor theater to a much larger, world-famous outdoor theatre in England, and the historic trip made by the Sandisfield Players to perform it there. Running time is 90 minutes.

All Fall 2021 events at the Arts Center are subject to change based on latest CDC guidelines. We anticipate operating at reduced capacity for social distancing, and asking audience members and performers to bring proof of vaccination or a recent negative test, and to wear a mask.

Enjoy the trailer from the film now.