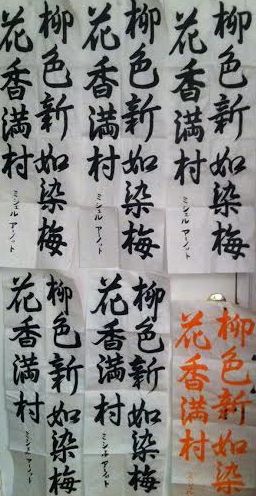 In the Gallery Sept 3-25: Shodou: Traveling Along the Long Path of Writing Japanese Calligraphy

The opening reception for the exhibit is Saturday, Sept 3 from 2-4PM

The ancient art of Japanese calligraphy (shodou) originated from Chinese characters (kanji) and incorporates the Japanese syllabary (hiragana). It is a form of meditation that requires ‘the four treasures’ –a brush, ink, inkstone and paper. While living in Tokyo with her family, long time Sandisfield home owner Michelle Arnot began her study of the art form. Three years ago she enrolled in Nihon Shuji, the Japanese Calligraphy Society with overseas chapters, under the tutelage of Seikou Sensei.  Members of the school receive monthly assignments that are sent to Tokyo for grading using the martial arts ‘dojo’ system. In 2016 Arnot achieved the first ‘dan’ (master) level of eight in kanji and invites her neighbors to witness the many steps she has taken along her long climb.

Gallery hours are 2-5 on Saturdays, 1-4 on Sundays, and by appointment with the artist.