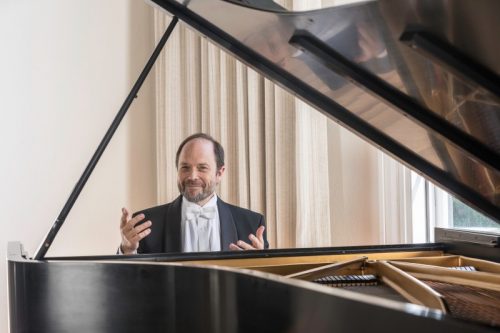 We are thrilled to bring back Frederick Moyer after his wonderful recital (and the debut of our Stainway) last year.

Moyer is equally at home with Bach, Rachmaninoff, and Schoenberg as well as Ellington and Peterson. His recitals are engaging and generally include time-honored favorites. His MoyerCam is a projection system that allows the audience to see his hands as he plays.  Audience members at his 2018 Arts Center recital raved about how much this brought them into the music as he played it, and garnered some converts to classical music.

Get your tickets early, this event is likely to fill the house!

Mr. Moyer will perform a program of classical piano masterpieces.  Here is the 2019 program lineup as we have it.

In his more than thirty years as a full-time concert pianist, Moyer has established a vital musical career that has taken him to forty-three countries and to such far-flung venues as Suntory Hall in Tokyo, Sydney Opera House, Windsor Castle, Carnegie Recital Hall, Tanglewood, and the Kennedy Center.

This introduction to Ravel’s “Ondine” with an introduction by Moyer captures his engaging approach to making the music accessible and alive.