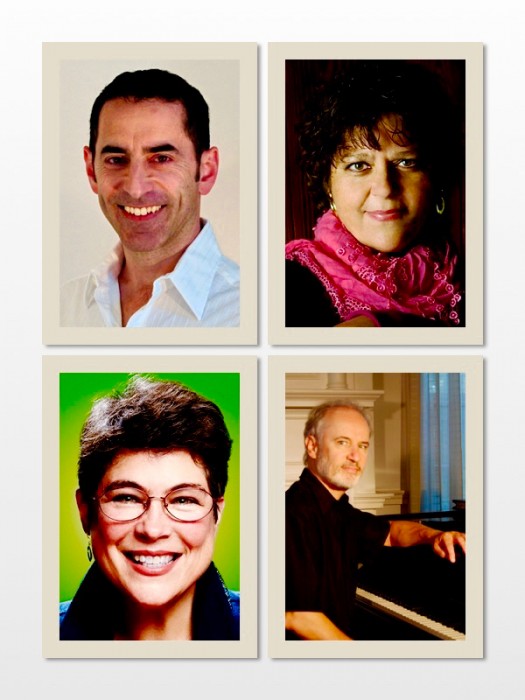 This special evening includes an intermission with prosecco and a resplendent dessert table. Cole Porter will always be remembered as the songwriter whose melodies are synonymous with the sounds and style of the Jazz Age, seen and heard on the musical theatre stage, and now part of the American Songbook. The beautiful voices of Kathy Lawrence, Linda Mironti, Brian De Lorenzo and accompanist Michael Rheault will bring these songs to the stage at the Arts Center.

Linda Mironti’s public singing career began in high school when she sang the national anthem every Friday night at the high school football games.  After 2 years majoring in music at Onondaga Community College she set off to Manhattan to try her hand at Broadway and the music scene.

After moving to NYC she sharpened and honed her talents by doing the “New York singer/actor/waitress life she took classes at AMDA (American Music and Drama Academy), private singing and acting classes along with going on many auditions.

In the late 80’s Linda was invited to go to Italy for a month to sing, and she stayed for 10 years.  She sang on Italian Television (RAI) as an American Female vocalist singing Italian songs in English for 2 seasons and other TV appearances.

She recorded 2 albums that are still sold throughout Europe and toured with Edwardo DeCrescenzo, Nana Vasconselos and Donatella Retore and others as well as her own tours in cities and venues from Milan to Sicily where she performed mostly Blues, Jazz and Rhythm & Blues and original pop material she wrote for herself and other artists.

In 1991 Linda returned to the US, and worked as female vocalist for Phil Philips Entertainment as well as party bands and worked with percussionist Robin Lobe in many Latin club appearances as well as in Cabaret venues in NYC.

Linda has been performing her one woman shows all across the US including NY, PA, NJ FL and MA to much acclaim, “she has found a sweet mix of story and song that includes a disarming candor which, when married to an old-fashioned glamorous voice, makes for a wonderful cabaret experience.”—Val Coleman, Sandisfield Times.

Brian De Lorenzo,singer, professional actor, recording artist, and Talent America’s 2001 “Performer of the Year” has performed at clubs in New York, Boston, Chicago, San Francisco, and Provincetown, and on cruise ships in Alaska and the Mediterranean. He has also sung at the Mabel Mercer Foundation’s New York and Chicago Cabaret Conventions and three Boston Cabaret Festivals. Brian’s CD Found Treasures was nominated for the 2000 “Recording of the Year” Award by the Manhattan Association of Cabarets and Clubs (MAC). Brian is a proud member of Actors’ Equity Association (AEA), SAG-AFTRA, and StageSource.

Kathy Lawrence started musical training at her mother’s side and quickly gravitated to popular music of the 1930s and 40s. At an early age she accompanied fellow singers on the piano, and indulged in her special love for jazz standards, show tunes and torch songs. Kathy’s voice is adaptable to a variety of musical genres, including jazz standards, show tunes, folk and classical music. She is best known to local food enthusiasts as the founder of Just Food in NYC (www.justfood.org), to farm policy wonks as the former Executive Director of the National Campaign for Sustainable Agriculture and to child nutrition advocates as the co-founder of School Food Focus (www.schoolfoodfocus.org).

Michael Rheault works locally and in New York City as a pianist and composer. He is currently a piano instructor and accompanist at Springfield College and Director of Music at St. Gabriel Church in Windsor, CT. He has music directed scores of shows at area colleges and local theater groups. As a composer, his newest musical, Fabulous!, ran Off-Broadway at the Times Square Arts Center last year and will soon be published and licensed through Steele Spring Stage Rights. Additional works include The Birth (A Christmas Musical), the chamber musical Neurotica, incidental music for David Mamet’s The Water Engine, and original music for the award-winning documentary Names from Home, broadcast on WGBY and PBS. He has received a MAC (Manhattan Association of Cabarets) award nomination for American Cabaret, European Roots, and a Just Plain Folks Award (1st runner up) for The Birth (JPF is the world’s largest independent music awards). Michael lives and teaches private piano in Springfield.