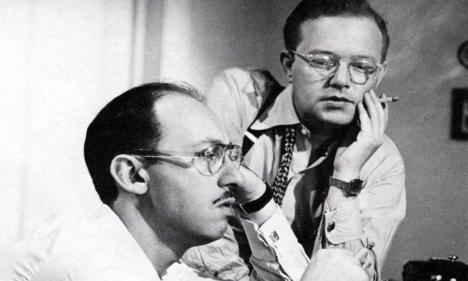 Come spend a very special evening immersed in the music of two of the most beloved song writers of all time.  Their music is timeless and has been sung by all the greats. Time magazine said Cahn & Styne were the country’s most successful songwriting team after Rodgers & Hammerstein.

Jule Styne is the versatile, prolific songwriter whose tunes became standards for three generations and the composer of such classic Broadway musicals–Gypsy, Gentlemen Prefer Blondes, and Funny Girl.  He was a notorious collaborator, which is why his name is less familiar than his music.  This was probably because of his consummate flexibility.  “You write as well as who you write with,” he said, and he usually let a musical’s lyricist and star set the tone for the score.

Sammy Cahn is the burlesque violinist who grew up to write some of America’s favorite songs and win four Academy Awards for such tunes as “Three Coins in a Fountain” and “All the Way.”

Now the voices of Mary Verdi, Linda Mironti, and Brian DeLorenzo, with piano accompaniment by Joe Rose offer their interpretations of Cahn and Styne’s work.

This special evening includes an intermission with Prosecco and a resplendent dessert table.